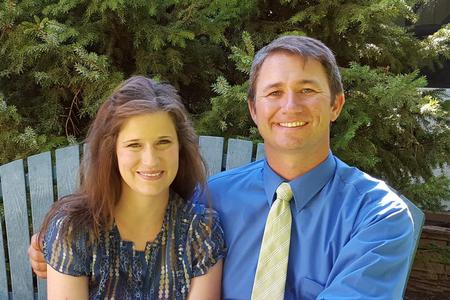 Pastor Skip Hinton and His wife, Missy, met at Victory Baptist Church in Bend, OR in the Fall of 2002. They were married in the Spring of 2006, and the Lord has since seen fit to bless them with seven children.

Skip and Missy moved to Lancaster, CA in 2007, enrolling in West Coast Baptist College that Fall semester and graduating in 2011. While enrolled in Bible College, Skip and Missy served in an interim pastorate for New Life Baptist Chapel in Taft, CA. Upon graduating, they moved their family to Taft in order to invest further in that work. Upon completion of their goals and the Lord providing a family to take their place, they were blessed with the opportunity to move back home to Central Oregon.

They began attending Grace Baptist Church of Prineville in the Spring of 2015 and began serving under Pastor Matt Burkhead. Skip was elected to assume the pastorate of Grace Baptist Church in the Fall of 2016, shortly after Pastor Burkhead announced the Lord's call upon his family to return Kennewick, WA to start Providence Baptist Church. The Hinton family is fully invested in both the church and the community of Prineville, eagerly anticipating the miracles that God has in store for the days to come!